Good Morning.. So, Abe to resign and will a new PM want a new man at the helm of the BoJ as to be honest, Kuroda has not managed to achieve either inflation or growth. Losing the founder of Abenomics may see USDJPY fall but we need to see what the new man has to say about change. The problem is that BoJ policies cannot fix a demographic problem. Now we have seen the dust settle, it is becoming clear that the Fed are now on hold forever barring a miracle and stocks are on the rise and the USD is falling. Again Powell is charging markets for the few while doing nothing for the broad economy and Congress still cannot agree on the fiscal spending needed. But this widening wealth inequality is a real problem in US society and it is spilling onto the streets!! I remain bullish Gold and bearish the USD and added a short USDJPY this morning whilst writing this on the Abe story. In fact, I think this USD move may be in its infancy.

A mixed initial reaction to Powell comments: But not much has changed regarding the debasement of the USD.

I think positioning into the Powell comments muted some of the impact but now the dust has settled we are seeing markets start to adjust to what the Fed are now suggesting with new policy. The most interesting move, which continued overnight, was the sliding USD but at the same time US yields rose yet again at the long end. US10s were up 2.5bps and 30s up another 4bps at 1.545% and the curve continues to steepen. But the USD is focused on two other issues, rising stocks (risk on) and the potential for more debasement of the USD from the Fed and to me this is core to USD weakness and gold strength still. What Powell admitted last night, is that when they tried to raise rates on the back of very low unemployment in 2015, it was probably a mistake. Yes, they do make them and who is to say they are not making another one! It seems to me that it will take something dramatic to ever see rates rise again in the US. The Fed seems to have abandoned pre-emptive moves against inflation. The question may yet arise if they can actually get that Genie back in the bottle if it ever emerges.

EUR held again at 1.1760 and this seems to be something of a pivot now and gold held again at $1910 and I remain bullish on both. Stocks are higher across Asia (apart from Nikkei) after a mixed close on Wall St which saw the Tech sector lag. But again we see rotation and not capitulation and stocks are higher again this morning as it is now clear that Fed liquidity will continue to be pumped into the system. What is not so clear is if or when the US fiscal stimulus for the unemployed will be agreed upon. Both parties still seem far apart and Kudlow suggested that the economy can continue to recover without more stimulus. US stocks still drive global equities but the capital flow into the likes of the DAX is still not convincing with sideways action for some time now in the DAX.

The daily chart above of the S&P still looks bullish supported by the MACD whereas the DAX below is still waiting to break higher out of the recent range (as I type before the cash open).

The MACD is supporting but I think we need to take out this 13,136 high. As far as the USD goes, I can see a steady rise in EUR from here and AUD, supported by higher 10yr yields than most in the developed world, maybe breaking out now.

The MACD now confirming this break higher and we have widening bands which suggests higher volatility in the current trend. At the heart of all this is the desire at the Fed to debase the USD.

The Fed has clearly dumped the Philipps Curve as any kind of indicator and will allow much lower unemployment and much higher inflation. I think it also may be an acknowledgement of the shifting demographics within the US economy with an ageing population and low productivity and wages. The dovish shift implicitly acknowledges that the Fed’s interest rises in the past decade were at odds with the economic reality of slow growth, strong global disinflationary pressures, and plenty of labour market slack even at low unemployment rates. The side effect of this new stance from the Fed may send equity markets soaring again but the Fed seems OK with that. But can the Fed generate inflation? They have failed miserably for years to get Core PCE anywhere near 2% and just talking about allowing higher inflation is not something that will create it. My fear is that the Fed is turning Japanese, where aggressive monetary policies and huge activity in asset markets, has created no inflation and weak growth for 20 years; does the Fed really want to head down this same path? It seems so and I have to ask if the Fed is becoming part of the problem and not the cure for what may lay ahead. 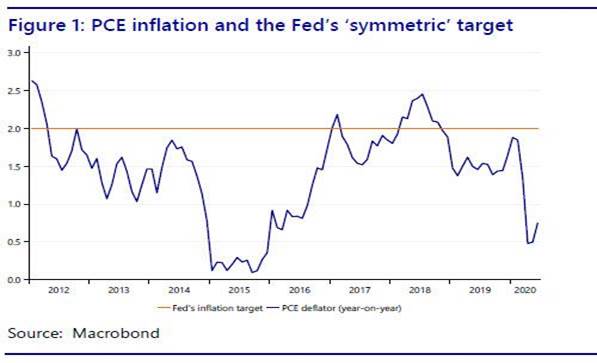 To make all these changes, the resounding thing going through my head is that suggests the Fed and possibly most central bankers got this totally wrong in the past. Our faith in them was misplaced and this is why they now have to adjust. They did not spark inflation or notable growth or rises in wages. You can’t have inflation without rising wages and a tight labour market. The Covid situation has also changed things forever, especially how we shop and how we move around and mobility counts for a lot in a consumer-led economy. The problem for me is that the Fed continues to feed the wealthy and does nothing for the 90% below them. Moreover, inflation is under 2% because the Fed ignores housing prices, employer health care costs, education, and stock market bubbles. This will create huge social inequalities which are already spilling onto the streets of America. While the Fed, rather arrogantly in my view, likes to see itself as part of the solution to America’s economic problems, it should ask itself whether it is also part of these problems. The fact is higher tolerance for inflation in itself does not cause inflation if slack is high or can’t be leveraged when it is low. Any inflation seen from Fed policies just ends up in financial markets and not the broad economy. Where is the benefit of higher inflation; I don’t want to see inflation; do you? In fact, inflation is taxation in disguise in my book.

As I was writing this piece, the headlines came out that Abe was going to resign on the back of health issues and the Nikkei dropped into the close. To my mind this means that the removal of the Abenomics founder, maybe bearish for USDJPY and in a weak USD environment, I think this is headed lower and would look to sell here at 106.55 with a tight stop at 107.10. A new leader will be found soon but I think this is big news in the short/term for Japan and the JPY.

A break below the mid-point ma at 106.10 may suggest a look at the lower band at 105.25. Any new PM will need time to gain respect and the Japanese economy is far from being strong as we saw yet again from the data last night that they just cannot stimulate any inflation. Their demographics have caught up with them. Tokyo August CPI came in at 0.3% y/y vs 0.6% prev and August Core CPI at -0.3% y/y vs 0.3% cons. This has been a huge failure by the BoJ and the government but what will a new man bring? Maybe it is time Kuroda went too.

The virus is still impacting as unlocking comes with consequences and I note with interest that South Korea’s financial regulator on Thursday extended a ban on short-selling of listed shares for another six months, as COVID-19 cases jump to the highest level since the pandemic. The current ban on short-selling KOSPI shares will be extended through March 15, 2021, as “widening of market volatility due to concern over the resurgence of the Covid-19” is expected, the Financial Services Commission (FSC) said in a statement according to Reuters. Looking at the chart above, one wonders why? The extension of the ban suggests, as global equities power to new highs (as measured by the MSCI World Index) effectively clawing back all losses from the February-March crash, that a renewed period of volatility could be ahead. I will be keeping a close eye on global equities but the Fed may just have given them another boost. But watch the VIX from here too. 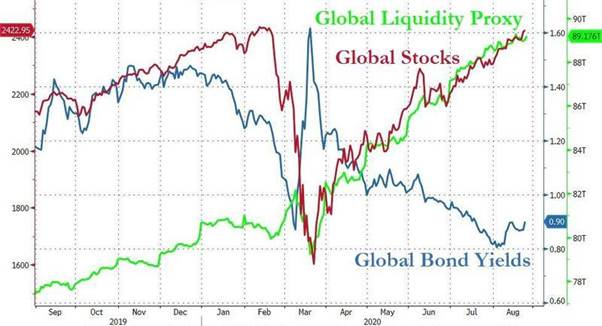 But as you can see from the chart above, stocks are driven by liquidity and the Fed is going to have its foot to the metal for a while yet!

As the Federal Reserve’s quantitative easing practices generate the biggest debt bubble in history, gold futures are trading at record highs, a phenomenon some have called “a bit of a mystery.” However, this “mystery” was solved long ago by the laws of economics. The only “mystery” here is why, contrary to centuries of economic wisdom, we allowed centralised paper money to become the dominant form of currency in the first place. Governments needed to fund wars and then got addicted to debt which was then passed on and made available to consumers who could now afford the unaffordable. But gold should do well in a world where the USD is being debased as an alternative to the USD and I will remain long for as long as I can. As confidence in the dollar continues to nosedive, the market is not only putting more confidence in gold and silver, but in some cryptocurrencies sharing many of the characteristics of gold. I think this USD move down may be in its infancy and it will have quite an impact.

Good Morning… Wall St rallied again into the close (minus the Dow) and nothing seems to be able to stop this and so I have exited my AUD crosses I had. Asian markets were unchanged or negative as we now head into the JH symposium tomorrow. I am n ...