Good morning.. Asia stocks took their queue from Wall St and followed the top 5 mega-caps higher. The lack of breadth in this rally is becoming a concern and there is data suggesting that shorts may now be out! Yes, I get that the Fed is going to keep printing money and that it will probably help underpin the rally but take a step back and look outside of the tch moves and there is some concern. We see that in bonds and the fundamentals like economic data. I noted the weak employment component in the ISM yesterday and unemployment is at the core of my concerns for the US recovery. I think this continuing debasement of the USD will see the trend down continue and I am buying EUR again and adding at 1.1705. EU data was better also with solid PMIs but I think unemployment outside the US will be controlled better. Pelosi is talking a potential deal but maybe not till next week!! We still have a busy week ahead and we may find ourselves in the eye of the storm today.

I still find the equity recovery quite astonishing in so many ways and it seems yet again that stocks focus on the positives and hope; and never anything that could be damaging. Yet again yesterday, we saw US markets, led by the 5 tech giants, send global equities soaring after strong US data and the belief that the two parties in the US will be forced to agree a new package of stimulus soon. It seems that TINA is live and well as we see wave after wave on a near daily basis adding to longs in global equities. JPM research suggests the shorts are now out. To sell equities one needs to borrow them and those that own them loan them out. 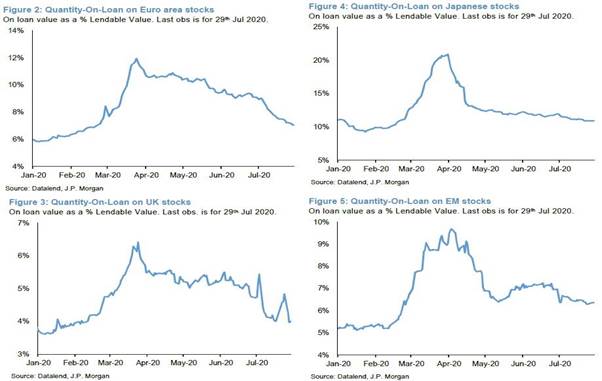 JPM suggests the shorts have been unwound. The bulk of the previous short base that had opened up during Feb/Mar across Euro area, UK and Japanese stocks has been largely normalised (US covered shorts earlier). It is only in EM stocks that there is some remaining short base, around 20% of that opening up during Feb/Mar, left to be covered.

Maybe there is no alternative as it seems central banks are so concerned that rates are going nowhere and some are talking of doing more! 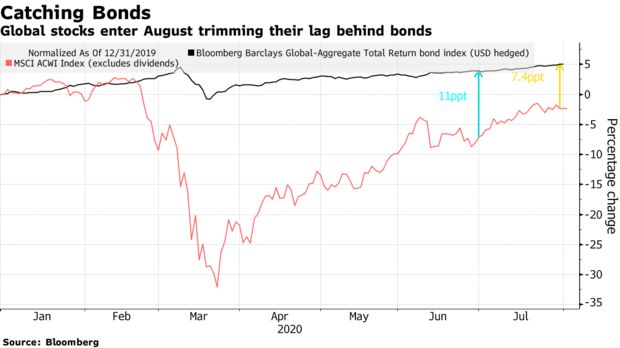 It’s been a heck of a start to the month and an impressive rally already. The US data yesterday had many suggesting that maybe the US recovery is not so far away after all as ISM beat expectations and the New Orders component beat by some margin but I did note the disappointing employment component and with rising claims and NFP’s this week, that is a little concerning and Construction Spending was also a concern. This was the highest ISM manufacturing print since March 2019 but.. 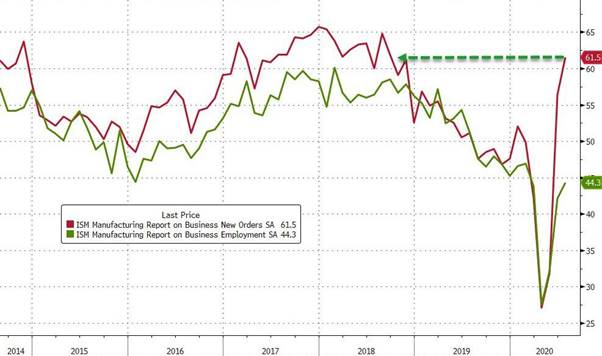 But again, investors took all the good news out of these data and ignored the not so good. Can nothing knock stocks off their perch?

The fact that there seems to be few prepared to short stocks is a huge concern. The other thing of note, with reduced fees is the rise of option trading as volumes race higher. This may prove a problem in itself if we do see a steep fall as it seems most are buying calls and not hedging the downside. A steep fall will create an ever-increasing snowball of selling! Of course, we need a decent sell-off for all that but the feedback loop in a market sell-off is proven to be more pronounced as volatility, delta, and gamma all spike and this results in even larger follow-on selling by machine delta hedgers. It may not be an option (excuse the pun) to sell; but a forced sell.

I am not sure at all that the US is out of the crisis as the virus data over the weekend is often corrupted and understates cases and deaths. Yes, part of the data was better yesterday but I still have unemployment at the heart of the crisis for the US. Without a serious fall in unemployment, the US economy will struggle. Even the USD rally yesterday petered out into the latter part of the session and remains mixed here and EU PMI data was also showing decent improvements so the USD direction is a little cloudy here. But stocks signal that the US may not need more stimuli but the fundamentals (remember them?) certainly do. We also have a disturbing and potentially damaging trade war developing and again, global investors choose to ignore this. Trump said TikTok will have to close its U.S. business by Sept.15, unless there’s a deal to sell the social media network’s American operations. Microsoft Corp. advanced as it tried to salvage a deal for the U.S. operations.

Stocks have had a stellar bounce since those dark days of the lockdowns and many economists and equity analysts apparently view the Covid-19 shock as a fairly short-term event that would last just 12-24 months, thus making little difference to the present value of future company earnings. I think, that until we find a vaccine, that idea is fragile and a longer spell of unemployment may be at the heart of defeating that theory. But we have a serious consideration to make with stocks over and above the economic fundamentals, as it is clear that monetary policies are hugely impactful. The Fed has demonstrated its willingness to take unlimited action to prevent further illiquidity and disruption, thus, the equity risk premium should be much less volatile, even in the event of a further major wave of economic damage from the virus. Basically the Fed has got their backs and possibly for a very long time. This negates a lot of the pressure we would normally associate with weak economics and we may have to get used to it. Is there still a queue of investors still waiting patiently for a dip to get in and will they be forced in at what could be the top? The NASDAQ made another all-time high yesterday, so buying up here must come with risks. The impact of the 5 meg-caps stocks is insane. Without a broadening of this rally, I feel that risks are rising as the breadth of this rally is too tight to be sustained in my view. Maybe all those adding to longs by buying calls will get a reminder that markets can bite soon. With so few shorts in the market and no breadth at all, that seems likely to me.

To add to the confusion, the Census Bureau has weighed in with its own weekly Household Pulse Survey, which shows a labour market that is still in terrible shape and may be getting worse, and the pain has spread far and wide into households. This is a new set of data and was created at the start of the pandemic. Week one of this data was based on surveys sent to households in the week from April 23 through May 5. This start date was well into the crisis. According to the BLS, April was the peak of the crisis, and according to the BLS, the unemployment recovery took off in May and June. But this was not the case in the data from the Labour Department and nor was it the case in the data from the Census Bureau. 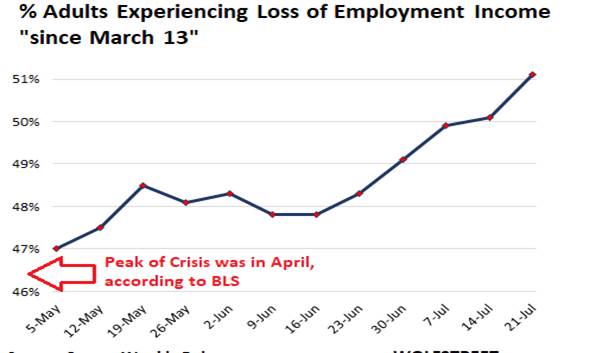 This is the Census Bureau findings (above). The latest survey was for “Week 12” (data collected from July 16 through July 21) and it showed that of the adults (aged 18+) in the US, an astounding 51.2% had experienced a “loss of employment income” for whatever reason during the Pandemic. This was up from 47.0% during “Week 1” ended May 5. It is worth noting here, as suggested last week, that the low-income earners (known as burger flippers) have been the mainstay of the fall in US unemployment over the last couple of years. Those days are over! I have had reservations about the validity of BLS data for years. Data from the Census Bureau corroborates the data from the Labour Department that the damage to employment has been huge, widespread but that the big recovery in May and June that the BLS has asserted is not yet visible in the data outside the BLS’ own little rose-tinted world.

Right now we have seen a bounce in the USD and I think many feel the US will be rewarded for the government coming together and getting a compromise on the bail-out programme but when? Pelosi seems to feel it may not be till next week. I the meantime, I am mot sure the USD can hold up but we still have a lot of data to come this week and the BoE meeting. We must remember that the Fed is going to continue to debase the USD and there is going to be a flood of Treasury issuance coming for years as the government commits to massive spending promises. I am not exactly sure what all this massive money creation will bring but I would bet a lot that it will be damaging at some point. My view is unchanged; and I think the USD is still going to trend lower and thus, I am getting long EUR again here in small at 1.1762 with a view to add at 1.1705 with a stop located around 1.1530.

I have also raised my stop in EURAUD (see below). Gold and silver may do well in this as I see USD weakness into year end.