Good morning… It was a big day for the EU and an even bigger day for the USD yesterday. The EUR lagged for a lot of the session but I think we finally saw some “real money” buying in the afternoon and to my mind, we continue to buy dips. I am sticking with my long EUR recommendation but it makes sense to raise the stop (see below). EURGBP is a tad higher but not reacting to quite worrying news from the UK on trade with both the UK/EU talks as far away as ever from a conclusion and talk that a US/UK trade deal will unlikely happen before the US election (see below). I think we will be back testing the recent highs at .9175 soon though and I am sticking with the buy recommendation from yesterday. This USD move is a trend in my view but I will be interested if it starts to decouple from risk. The inverse correlation to risk may get tested as global trade looks set to take a hit again as tensions rise between the US and China. The more damaging phase2 of the trade wars is upon us. Negative real rates are having a big impact now on commodities and a weaker USD changes a lot of things; many for the better. But the last thing we need is a breakup of globalisation. Canada inflation and US existing home sales on the docket today..

Yesterday saw, in my opinion at least, a significant day for both the EU and the US dollar and I think we eventually saw some real money buying of EUR yesterday and I am not sure this EUR strength is done yet. Yes, the final deal is not as strong as it could be and there is the danger that it is not enough but to my mind the seal is broken and if necessary, we may even see more of this. To me it was always going to be a ground-breaking event if passed. But it took a while for the EUR to move and the afternoon session saw EU stocks fade some of the gains. But it was the break in the USD that really caught the attraction and not just against the EUR as for most of the session, it lagged. The move started with the AUD as stocks rallied and a strong risk on theme built through the day.

We saw chart breaks across the board from AUD and Kiwi to GBP and the EUR and the DXY broke support at 95.60. BUT EURGBP was subdued for most of the session which I found strange but I think this is headed back to its recent highs at .9175 at the very least, as I suggested yesterday when recommending a long position at .9020.

The headwinds facing the UK are still huge and it seems clear that the UK is aligning itself with the US on China issues and that may bring about a retaliation (trust me it will). The UK needs all the friends it can find as it seems less likely that we see a significant trade deal with the EU now or even one at all. According to the Telegraph today, Ministers now believe that Britain and the EU will fail to sign a post-Brexit trade deal, with just days to go until Boris Johnson’s July deadline for an outline agreement passes. The differences seem insurmountable and have done for some time and I am not sure this is just part of the “art of the deal” jostling. Siding so clearly with the US over Huawei is also a big step for the UK who needs to do business on solid terms with the 2nd biggest economy on the planet which is rapidly about to become the biggest. Buy EURGBP.

Johnson is being pressured hard by the US to stand together on this China issue and I fear what that may mean. Hopefully it will guarantee a great trade deal with the US but are we strong enough to make demands? According to the FT today, the government has abandoned hopes of reaching a US-UK trade deal ahead of this autumn’s American presidential election, with British officials blaming the Covid-19 pandemic for slow progress and again I would suggest this is bullish for EURGBP. Pompeo says he wants every nation to push back against the Chinese communist party but I fail to see how that is positive for global trade and thus, the global economy. Many nations are being forced to choose now between trade with China or alliances with the US! The UK economy is very fragile and unemployment is a big an issue here as it is in the US and will be an anchor on the economy for a while. Can the UK afford to ignore or step away from trade with China? I don’t think so.

A recent survey by the China-Britain Business Council found links with China in trade, tourism and higher education support up to 150,000 UK jobs, with many based outside London. UK exports to China, which have increased six-fold in the past 14 years, stand to grow further as the 400m people who make up China’s middle class buy more of what the UK is good at, from creative services to luxury goods. Right now the technical outlook in EURGBP is still not that supportive but the fundamentals fit my bullish view on this cross.

A break of .9175 should see all that change and a break there should see a move with little in the way until .9400 and that is my target. On top of all this, we are still unsure how damaging unlocking the UK economy will be and it is clear that trade deals take a long time to conclude. The BCC’s C-19 impact tracker found that on average, companies are operating at 53% capacity; BBC Director General said this demonstrates the UK economy restart remains in first gear and called on the government to cut taxes to help businesses recover.

On the virus issue, the news is not great from around the world with Tokyo suggesting people should stay in and cases still rising in parts of Australia and India. A survey of healthcare executives shows that most don’t think there’ll be a safe, effective vaccine widely available for another year or two. But what really worries me is that US/China relations seem to be an all-time low and Trump is risking a great deal here in looking tough to his voters at home in front of the election. The 2nd phase of the trade war, which will be more damaging, is upon us and that is not good for stocks and investors are seemingly not pricing this. I note the fall in the VIX with stocks through the top of the range and it seems there is no fear. Financial conditions are back to where we were before the rout in March which seems to be driving this equity confidence. 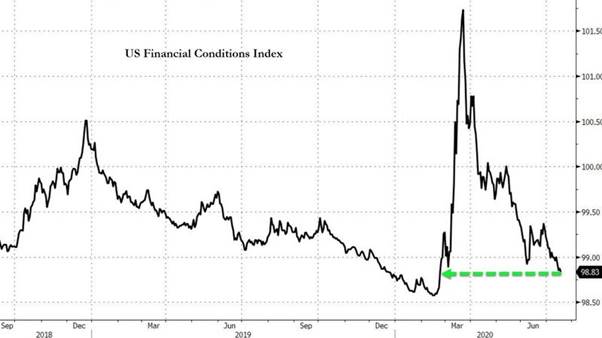 Interestingly though, the monthly VIX expiration is today, which many times over the past year-plus has marked a local/tactical inflection-point in Equities. But stocks fell on Wall St into the close as Senate Majority Leader McConnell casts doubt on a stimulus bill being completed by next week. The US needs this passed as if it is delayed, millions will be left without financial support from being out of work. To my mind, the case for a weaker USD is not going away and it remained on the lows overnight and I am keeping my long EUR recommendation but will raise the stop into a profit to 1.1390. (1.1422 now support).

The impact on commodities from the lower USD were clear to see with Silver jumping to the highest in almost seven years and gold continued its march toward a record on expectations there’ll be more stimulus to help the global economy recover from the coronavirus pandemic. 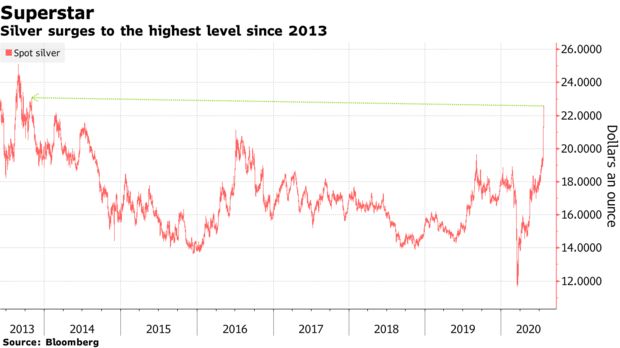 Silver surges to the highest level since 2013

Silver had a very strong Asian session too. Commodities across the board surged higher as the USD fell hard. Precious metals seem to be in demand as some form of haven against the debasing of the USD and all the stimulus sloshing around the system. I do wonder if some now see these as a hedge against the dizzy heights that stocks trade at but that is no pure science and if stocks did fall hard, a lot of these trades would probably follow. Silver’s surge has been getting an added boost from supply concerns and optimism about a rebound in industrial demand. I think falling real yields in the US has made a big difference and the USD is now trending lower. This is good news for commodities and the global economy but that is somewhat tempered by a new wave of damaging trade wars.

2020 global per capita GDP is in the process of registering one of the largest yearly declines in the last century and a half and the largest decline since 1945. The lasting destruction of wealth and income will take time to repair. A major slump in world trade volume is taking place and trade wars will make things worse. Additional debt incurred by all countries, and many private entities, to mitigate the worst consequences of the pandemic, while humane, politically popular and in many cases essential, has moved debt to GDP ratios to uncharted territory. This ensures that a persistent misallocation of resources will be reinforced, constraining growth as productive resources needed for sustained growth will be unavailable. The problem we have is that central bank monetary policies are deflationary; don’t they realise that yet? The money they are printing has no velocity in the broad economy and as such is wasted apart from making the fat cats fatter. The point here is that the inflation the Fed expected to generate in the economy has ended up in asset markets. Did they learn nothing from Japan? But the real danger may be if that money ever finds its way into the real economy!