Good Morning.. Markets ramped again in to the Wall St close in an illiquid surge in the last 30 minutes (again). Asia saw a decent session but US futures are lower again this morning as indicators still show a lot of risk out there. Gold, remains bid (and I recommend longs again), bonds are bid and USDJPY just can’t rally, even in a risk on session (I am recommending a short, looking for a test of 105.00). Risks still remain, even though lockdowns are helping but they are damaging to economies. So far the data is not picking this up, so that cut from the Fed looks extreme but more is being priced. The world’s central banks are catching down to the BoJ and ECB and in my view, both JPY and EUR should rally. Not much data today but markets will start to focus on NFPs and earnings from the US tomorrow. Again, not sure if that data will pick up recent stress. But corporates are seeing margins collapse and the easiest cost cutting is shedding jobs. It’s coming but it may be too soon for this weeks data. I guess that is what is stressing the Fed but also we are seeing further stress in the repo market, even after that Fed cut!! It seems likely that the impact on businesses and the consumer may run on a while yet and will show in the data soon but will central banks ever be able to reverse these extreme cuts without crashing the markets?

No surprises yet in the data and stocks react to positive response to the virus spread. Shorting USDJPY and buying gold:

Early in the session yesterday, I thought the market would fade the equity rally we had seen on the back of the Biden results as to be honest, nothing had changed regarding the virus but the market got a further boost from no shocks (yet) from the PMI and ISM data and the fact that Italy is locking down and that a lot of money is now being thrown as the crisis. EU PMI services were not picking up the deeper threat we now see but US PMI (final read) remained very weak while ISM diverged even further. These reports are put together differently but this divergence in business survey data is perplexing to say the least. One shows deep contraction and the other strong expansion! So is the data the worst for 7 years or still on fire; I have no idea? 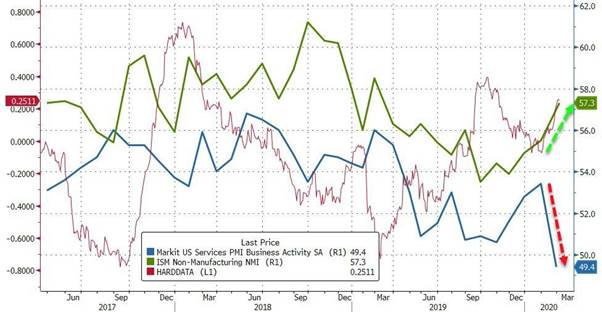 Quite what we take from these data is difficult to establish but markets will turn to focus on the NFPs and earnings due tomorrow. The employment component of ISM was at a 7month high. Markit’s version of events is that the data they collected included fears over the virus issue. Markit also suggest that GDP would likely slip from 2% to just 0.7% through Q1.

The repo market is still stressing, gold remains bid (dipping a toe back in at $1639.00 this morning), as do bonds; all signs of risk aversion still and of course, vols remain elevated. Interestingly, USDJPY is still struggling to rally with risk on but suffers from risk off and so with US yields likely to remain low for some time, I would look at shorting USDJPY (a tad late I realise) looking for a test and possible break of 105.00 (short at 107.31 this morning). But stocks seemed to like the fact that quite a lot is being done to quarantine the impact with massive lockdowns now seen in Italy and the US (finally) throwing funds at this in readiness. But in financial markets there is still stress as the overall liquidity shortage after the Fed cut was nearly $180BN, the highest since the start of the repo crisis and a clear signal to the Fed that it needs to do something to further ease interbank lending conditions. The amount of securities submitted into yesterday’s repo op was a whopping $111.478 billion, which was not only higher than yesterday’s $108.6 billion, but it was an all-time high amount of overnight funding needs expressed by dealers. I am not sure we should rule out US yields falling further no matter what Bullard says and he is a non-voter now. Finding ways to push down longer-term interest rates could, in fact, be the Fed’s preferred option. Governor Lael Brainard has proposed a Japan-style “yield curve control”, where the Fed sends short-term rates to zero, then puts caps on medium-term yields as well, as a kind of credible promise that it will keep rates lower for longer. They are clearly spooked and are flying kites. Where did that get Japan? NOWHERE.

The big banks are still messing with the Fed or something is really dangerously wrong! Which, stated simply, is rather bizarre as it means that not only did the rate cut not unlock additional funding, it actually made the problem worse, and now banks and dealers are telegraphing that they need not only more of a repo buffer but likely an expansion of QE. If that is the case, then rates probably will come lower but Bullard was pouring cold water on that idea yesterday. Just how much easing are we about to get from the Fed? It could be huge. The BoC cutting 50bps was something of a shock but rates there were the highest in G10 but does suggest we may get more cuts from CBs this month where possible. I was rather surprised that EUR did not rally more with the suppression of yield differentials but I am sticking with the bullish view for now. The BoC were extremely dovish in their statement and the OIS is pricing in over 50% chance of an additional 25bps cut in April as the entire world sinks into a rather scary Japanese mode. The world is catching down to the BoJ and ECB and to my mind both the JPY and EUR should rally as they can do little more of note with rates.

There was little chance seen of any recession in the US going into this virus spread and so the 50bps cut in between meetings is still seeming like a shock to many economists. Looking at the data so far, this move by the Fed is a massive pre-emptive strike against a huge guess that data is about to collapse and the economy with it. Is this move too much for a crisis that may end in the spring or a justified move that may save the global economy? That remains to be seen but the lockdowns and measures to combat the virus spread are damaging for a multitude of businesses. The issue is whether cutting rates is enough to restore what looks like being a huge knock to consumer confidence and spending. If we do avoid a recession, can the central banks take back these cuts without crashing the markets? That is clearly something to consider in the future but right now it seems more is on the way; the central banks are collectively extremely concerned so I guess we should be. Quite why the worlds central banks want to go down the road Japan has been on is beyond me as Japan is in its 5th recession since 2008! What if all this monetary stimulus fails to work?

Apart from the VIX, there is another gauge used by investors to asses risk and that is the cross-asset correlations and in the past, this has been an accurate indicator of pain and stress in the markets. This is produced by the clever people at MS. 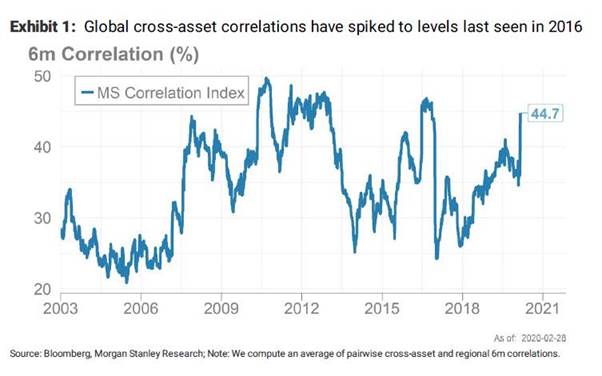 The rise you can see on this chart suggest that even with 4% rallies that we have seen, concerns clearly remain in place and further sell-offs look likely. The chart refers to how closely prices in different assets are moving relative to each other (credit versus equities, equities versus rates, equities versus FX, etc.). While cross-market correlations have broadly risen across the board, credit-equity correlation, in particular, is now near a 20-year high and has only been higher in 2011. The cracks are appearing in the credit space so look out. What we are seeing is that equity-rates correlation is now extremely positive as government bond yields fall in tandem with equity markets, particularly in Europe and Japan. There are also unusually high correlations between US and European stocks, and extremely negative correlation between JGB yields and JPY, as JGB yields fall alongside a rally in JPY in the sell-off. Again, the signs of stress and fear remain if indeed you want to look.